Surf Sports brightest stars returned to the beach today for the first big hit out this summer at Alexandra Headland. The very tough conditions and strong winds of  up to 50km/ph  meant the more experienced competitors rose to the top.

Shannon Eckstein showed he was a class above, in a star studded field, to take the win in the inaugural Summer of Surf ironman event.

“Those were some of the toughest conditions I’ve raced in in a long time!

But it was great to have a good hit out back home in Queensland and a good lead in to the first round of Kellogg’s Nutri-Grain in 2 weeks time.”

Matt Poole came from the clouds in an astonishing final swim leg to take second, with Ali Day taking the final podium placing on his return to the sport following a thirteen month hiatus.

Brodie Moir stamped ‘return to form’ on her Iron woman racing Visa with a powerful win, after leading from start to finish. After a disappointing last season, combined with an off season knee injury, the World and Coolangatta Gold champion powered though the tough conditions in the opening ski leg to set up a lead and the rest of the field couldn’t catch her.  Jordan Mercer and Karlee Nurthen finished in second and third in a field which included 12 of the 15 Kellogg’s Nutri Grain Ironwoman  series.

World champion Chanel Hickman and Simon Harris took out wins respectively in the beach flags. Crowd favourite Alexandra Headlands own Alyssa Bull returned to the surf to take the crown in the open Women’s single Ski with Lachlan Tame again proving impossible to beat in men’s event. Tame has won 4 Australian titles in a row and looks like the man to beat again after only 1 round of Summer of Surf.

In an upset Mooloolaba’s B Taplin teams managed to take out both the Men’s and Women’s finals with Matt Poole anchoring his team to victory with another strong swim.

Fox Sports Summer of Surf Alexandra Headlands round 1 will air on FOX Sports on the 7th of December and all summer long! For a full list of results head over to summerofsurf.tv 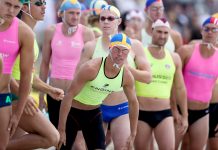 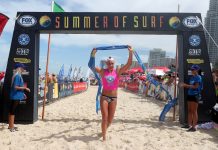