With only 2 rounds to go to the race for club pride is still very much alive. There are only 3 points that split the top 6 teams in the mens Aussie Bodies Taplin Series, which made for some exciting racing for round 5. In the women’s series it’s all about trying to knock off the unstoppable Northcliffe team of Dani McKenzie, Courtney Hancock and Harriet Brown who have won the last 3 rounds in impressive fashion.As the gun went for the men’s Aussie Bodies taplin final it was the unmistakable red ski of Kurrawa’s Matt Bevilacqua that went straight to the front. As the boys headed out to sea Bevilacqua was joined by Manly ski specialist Sam Speer and current ski series leader Jamo Porter from Alex Headlands. The trio made their way back to the beach before tagging their respective swimmers for the second leg. Manly’s Kendrick Louis and Kurrawa’s Matt Poole went stroke-for-stroke all the way back to the beach before Poole used his tall, wirey frame to get up early and put a 10 metre gap into the Manly team before tagging his Kurrawa team mate Daniel Raward. Hot in pursuit was board paddling prodigy Harrison Stone from the Manly the club. After numerous lead changes it was Harrison Stone who had the fresh legs to sprint up the beach ahead of the Kurrawa paddler and claim Manlys second Aussie Bodies Taplin win for the season.The women’s race was a little less exciting but even more impressive. The girls from Northcliffe once again showed why they are the World Champion’s by dominating the Aussie Bodies Taplin final from start to finish. A strong swim from Courtney Hancock set up the victory for the Northcliffe club as they cruised home for their 4th consecutive victory. With round 6 just up the road from their home beach we are excited to see the show this star-studded team will put on 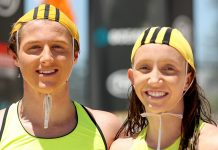 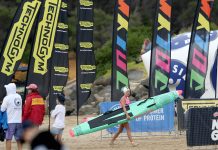 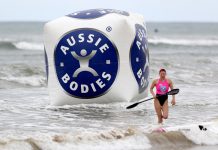 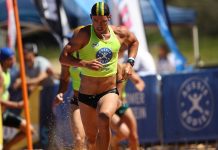 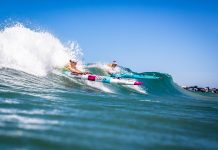