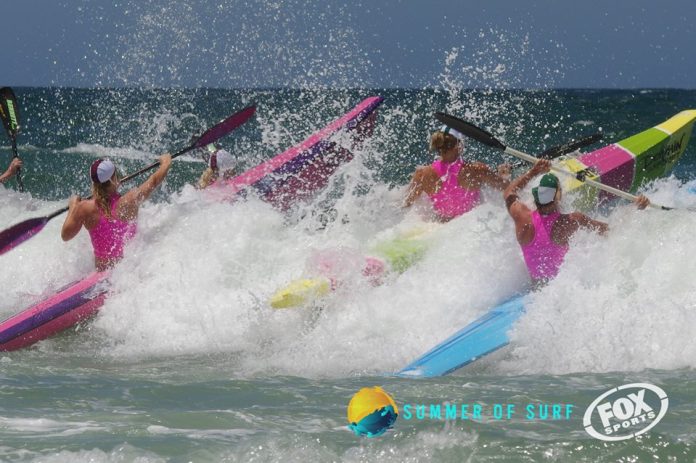 INTRODUCTION:
Summer of Surf is set to sizzle, delivering its most elite and engaging Surf Sport Series in history commencing in summer 2016 – 2017. To be broadcast globally, from 6 iconic Australian locations, the tide is high for change in mainstream Australian sport.
Athletes from around the world will arrive shortly to prepare for the summer of racing.
Beginning on the 22nd of October, the Summer of Surf series is open to all Surf Life Savers, with the very best Ironmen and Ironwomen, swimmers, ski and board paddlers making it onto the Fox Sports finals broadcast each week.
With a significantly increased athlete Prize Pool, and expanded integration across the Fox Sports network, this year will be the most exciting year to date for Summer of Surf.
Series director John Palmer can’t wait to be back on the beach.
“We started this series to create more opportunities for next generation athletes to race at an elite level and inspire nippers across the country. To see it capture the interest of the Australian public is truly fantastic for the sport.”
“We’ve tried to engage all stakeholders following last seasons Summer of Surf to work out how to go bigger. SLSA continues to be an avid supporter of the Series.”
“Surf Life Saving Australia has supported the Summer of Surf Sports Series since its inception and we are pleased to continue to work with the team. We look forward to some exciting competition throughout the series culminating in a number of the top athletes from this year and last year gaining entry into Surf Life Saving’s Nutri-Grain IronMan & IronWoman Finals Series,” said Melissa King, Chief Executive, Surf Life Saving Australia.
Fox Sports have played an integral part in the growth of the Summer of Surf and continue to be a key element to the future success.
Last years dual Summer of Surf and Nutri-Grain Ironwoman Champion, Noosa Head’s Jordan Mercer, loves the Summer of Surf balance, racing for herself and with her teammates. “It’s nice to know when I’m working hard at training that beyond trying to defend my Ironwoman title I can race alongside some of my best friends and attempt to win a teams title too, that’s really special”
Palmer notes, “Most importantly were announcing some fantastic new and renewed commercial partnerships in the coming weeks which will be vital in building on last years
momentum.”
“We’re excited to welcome 3 new locations for the series this season. We look forward to
showcasing Port Stephens, Wollongong and Surfers Paradise in particular as some of the best tourist destinations Australia has to offer.”
THE EVENTS: