Narrowly missing out on this years Kellogg’s Nutri-Grain Ironman Series (KNGIS), Karlee Nurthen sets her sights firmly on the Surf Ironman Qualifying Series (SIQS) as her focus for the 2014/15 season.

After an impressive weekend of racing at the KNGIS trials held at Salt, Nurthen was sitting in 6th position with a grand total of 46 points. With 4 girls automatically qualifying for the professional series and 2 wildcards up for grabs it was an excruciating week for the Moolooloba rising star. Nurthen received the news that Brodie Moir who was unable to trial due to injury and Emma Dick securing 5th position, both part of the 2013/14 KNGIS, had received the wildcards. This was obviously hard for the young star who has been on the cusp of qualifying many times “It was really disappointing after all of the work I had put in”. Going into the trials Nurthen felt that this was her year, and at the completion of the event on the Saturday looked in fine form. It was the final on the Sunday morning that ultimately prevented Karlee from taking a top 4 position. Nurthen was leading the race in the final ski leg but was struck by a set of waves that proved too powerful, leaving her to finish in 12th position. However, the iron woman won’t let this affect her, believing that “It’s not about how hard you get hit, it’s how you stand up that makes you”. 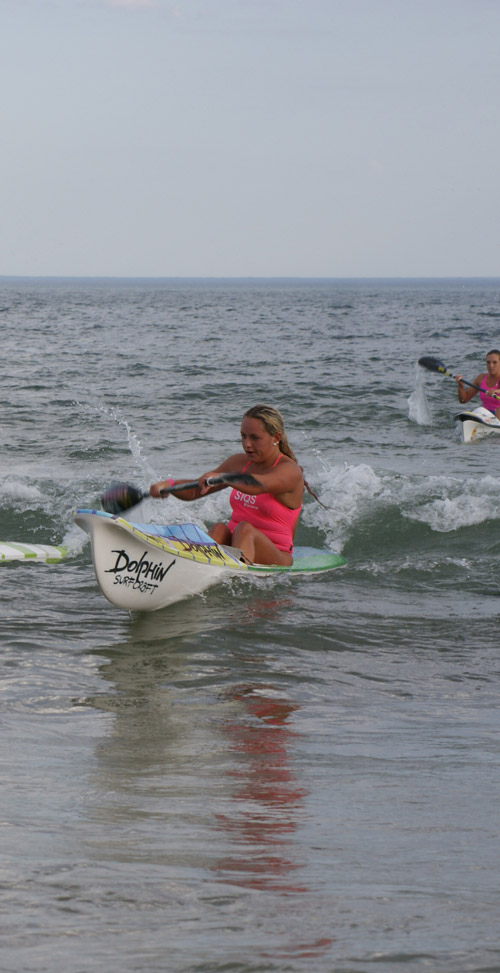 The strong-minded athlete has not let this ruin her 2014/15 dream of racing the top iron women in the country. Nurthen reveals that the 2013/14 SIQS provided her with some of the best racing experience to date, attracting many of the professional iron women including her older sister Amy Nurthen. Karlee proved to be able to mix it with the best, coming away with 6th overall, a mere 3 points behind Jordan Mercer who was the third athlete to qualify for the series through the SIQS. Nurthen hopes that a strong season in the SIQS will be the key to securing her spot in the 2015/16 KNGIS. The 7 rounds of the SIQS will see competitors racing at some of the most iconic beaches and carnivals along the east coast. Nurthen is particularly looking forward the Australia Day weekend with a competition at Manly on the 24th January, closely followed on the 26th at Freshwater. It was only one year ago that the teen moved from the Central Coast, New South Wales, and has therefore competed at these carnivals since the age of 12. “I really want to have a good result especially in front of a crowd of people I grew up in front of”.

Whilst catching up to Amy on the surf sports circuit is her priority, Karlee is adamant that she is already a better cook, has more followers on instagram and is faster at sprinting to her favourite spot on the couch after an exhausting day of training “hopefully that will keep me in good stead to overtake her in a few other areas in the near future”.

Nurthen reveals that she is extremely focused on reaching her goals. She is training harder than ever under Michael King along side team mate Hayden White, who was also unable to make the Nutri-Grain Series this year. The pair chose not to compete at the World Championships in France, and are using this time to get an advantage over their competitors. Nurthen will have her next hit out at the Coolangatta Gold, where she will be competing in the Open Women’s short course. “It is something else to look forward to and is great for motivating me to train”.

Nurthen is definitely one to watch in the SIQS  this season as she is determined to prove herself as a young gun.