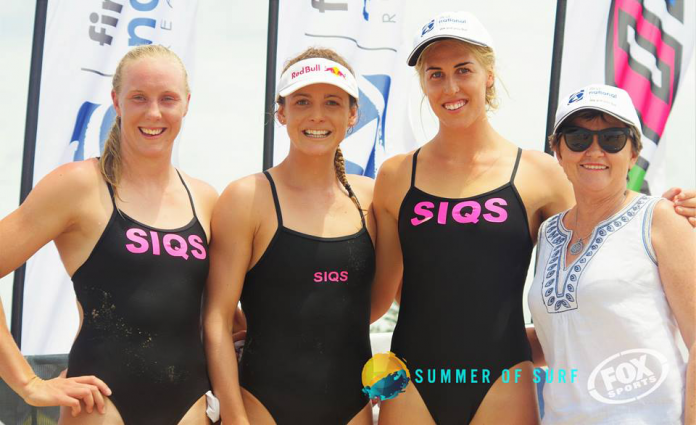 The First National Real Estate Board Series is shaping up to be one of the most anticipated races of the season. In both the men’s and women’s fields we are seeing some of Australia’s best paddlers stepping up to battle it out in a bid to take out the Series Title. The third round of the First National Real Estate Board Series travelled to Alexandra Headland, where tough competition proved to test our athlete’s speed, power and skill.

Jordan Mercer secured her second victory for the season in the women’s event. Mercer has proved that she is determined to repeat her performance from last season and aims win back-to-back First National Real Estate Board Series Titles. However, Danielle McKenzie has also shown herself to be one to watch, taking the number two position for the second time this season. In a sprint finish Northcliffe’s McKenzie almost took out her first win of the season but fell just short of Mercer’s speed. Jordan’s newest teammate Kirsty Higgison is showing similarly good form and managed to take out third place. With Jordan and Kirsty both looking extremely fast, we could definitely see one of the Noosa Heads girls on top at the end of the First National Real Estate Board Series.

In the men’s race Matt Bevilacqua finally had the board race he has been hoping for all season. After taking a 16th in round 1 and 13th in round 2, Bevilacqua was determined to sit in one of the top positions in the round 3 final. After an impressive start Matt managed to keep himself just behind the front of the pack, coming home strong and finally taking out the win. It was Luke Cuff, Michael Saal and Sam Fuller that gave Bevilacqua a run for his money, leading the race around the cans. As the four boys headed for home it was anyone’s race to win, but Matt managed to pick the best line and chase a runner into the beach. Cuff took second, with Saal and Fuller in third and fourth.

The next round of the Board Series will be contested at Thirroul on the 5th and 6th of December. Marking the half way point of this season, we will finally be able to see the athletes that have managed to secure themselves a promising position on their way to taking out the First National Real Estate Board Series Title!