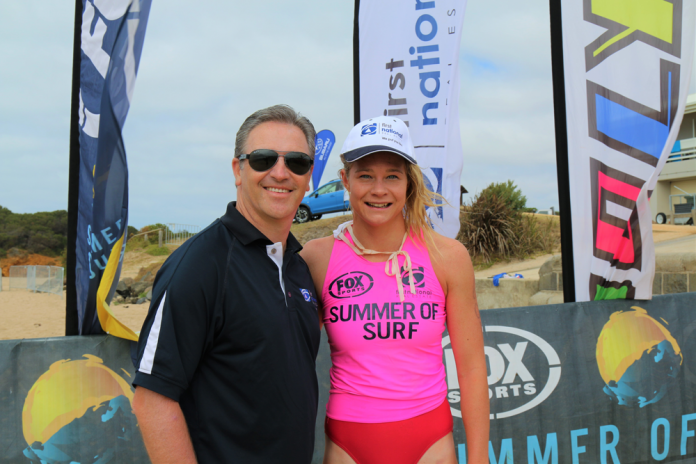 The First National Real Estate Board Series started 2016 with one of the most exciting events of the season! For round 5 of the Summer of Surf athletes from across the country travelled to Torquay, and were all determined to take out the win against their biggest rivals.

In the women’s event we saw one of the biggest board race start lines ever, with a final of 31 women. It was current First National Real Estate Board Series leader Danielle McKenzie and young gun Lizzie Welborn that managed to break away early, with a pack of 5 chasing them down. After turning the cans for home, McKenzie and Welborn looked to have 1st and 2nd taken. However, as Kira Kiney, Jayde Hadstaff, Kirtsy Hardstaff, Tess Dubberly and Jemma Smith headed for home they worked their way towards the break, securing a set wave and managing to catch the two leaders. In what became a sprint finish in 7 it was City of Perth’s Jayde Hardstaff that secured the win with McKenzie in 2nd and Kinsey in 3rd!

The First National Real Estate Men’s Board final boasted a similarly large field. It was Surfers Paradise’s Zachary Orchard that got the best of the start, leading with teammates Nick Malcom and Max Beattie to hit the cans with Surfers Paradise in 1st, 2nd and 3rd. It was Max Beattie that then worked his way to the top, with Newport’s Dane Farrel coming through to join him on the first runners. As the front pack headed for home it ended with 6 on the same wave, and it was Manly’s Jay Furniss that managed to line himself up for a perfect finish, sprinting ahead to claim the win from Orchard, with Farrel in 3rd.

The First National Real Estate Board Series has become one of the most hotly contested events of the summer, and we are excited for what is to come in two weeks at the Freshwater Open Surf Carnival!