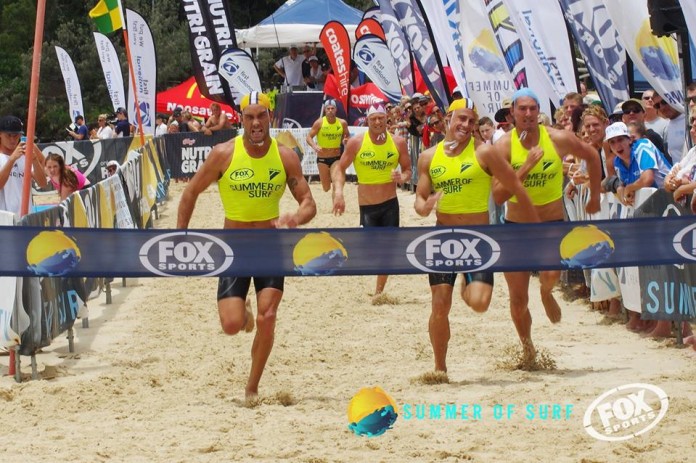 Round 7 of the Summer of Surf saw us head North to Noosa Beach on the beautiful Sunshine Coast. In contrary to the other six rounds, we were witness to the worst conditions this season with torrential rain and flat surf. Conditions aside, we still saw some of the toughest and fastest racing this season. After the recent completion of Nutrigrain Ironman Series, we saw many of the sports superstars head north in search of some last minute points ahead of season finale in Newport in late February.

The women’s field was headlined by hometown hero and newly crowned Nutrigrain Series Champion Jordan “Magic” Mercer. Noosa Beach saw Jordie put on (what can only be described as)  a “clubby clinic” winning multiple team and individual events. However, Jordie didn’t have it all her own way. She just managed to out-sprinted rising star Jemma Smith and the ever consistent Harriet Brown to claim a popular Ironwoman victory on her home turf.

The Mens field boasted arguably the most impressive Ironman final we’ve seen this year, with current and future stars all lining up to claim some valuable SIQS points before the season Finale in Newport. Much like the women’s final, the men had a 5-way sprint finish with Matt Bevilacqua getting a controversial win over roommate and training partner Matt Poole with Jay Furniss picking up a handy third place.

There were many impressive races on the weekend but none better than the open mens board race. Following two seasons of improving results we saw TJ Hendy finally pick up his first open board race. After a smart and and calculated race TJ managed to take out a star studded boarded final ahead of Jack Moyes and board paddling legend Hugh Dougherty. With so much amazing board paddling talent in the Summer of Surf, the board race will be one-to-watch at Newport.