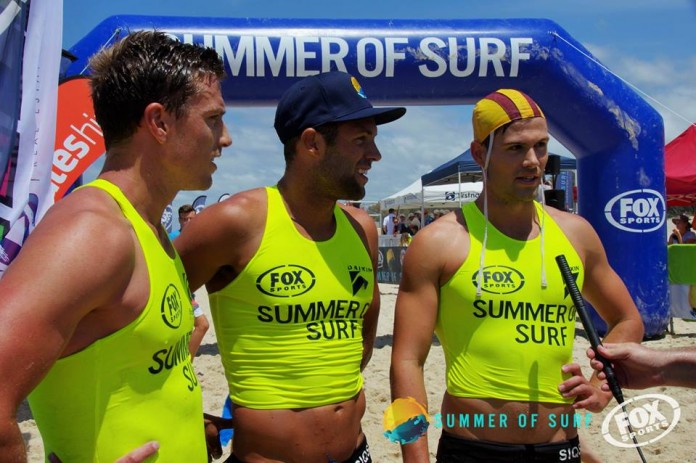 The Summer of Surf will be travelling south to Redhead this weekend for round 2 of the summer. With only a few days to go all of the athletes are excited for another great day of racing and the opportunity to secure crucial Series’ points. As we move into the waters of New South Wales we will see a sea of new faces step onto the line for the first time this season.

The Sydney based Ironmen and Ironwomen have already made their mark in round 1 of the Summer of Surf on the Gold Coast, and they will be keen to keep up their outstanding results as we visit their home state.

For the first time in quite a few years Sydney will have two of the professional Ironwoman living and training in the area. Georgia Miller’s outstanding performance in the Surf Ironman Qualifying Series (SIQS) last year saw her qualifying for the Nutri-Grain Series for the first time. Miller proved herself to be an allround threat in round 1 of the Summer of Surf at Kurrawa by taking second in the Open Surf Swim, the Daikin Surf Ski and the First National Real Estate Board. North Bondi’s Lizzie Welborn will be racing in her first Summer of Surf event this season at Redhead. After an impressive SIQS last year, the young gun will be hoping to start her season with a bang. Just a few months ago Welborn secured herself a spot in the professional series after an outstanding performance at the Nutri-Grain trails. In a tough field Lizzie managed to take out the top position overall.

The Sydney based Ironmen also demonstrated their strength at Kurrawa. Newport managed to claim first, second and third in the first round of the SIQS with Kendrick Louis, Dane Farrell and Max Brooks proving their hard off season is staring to pay off. The Newport squad that took out the Open Male Taplin at Aussies earlier this year appears to have gotten even stronger. Sydney will also be represented by Ironmen Nathan Smith, Jay Furniss, Mitchell Allum and Hayden Allum this weekend.

Redhead’s Isak Costello and Justin McMorland are talented young Ironmen that will be looking to race well on their home beach. McMorland showed everyone his potential last season when he took out the Ironman event at round 6 of the Summer of Surf. In the Ironwoman event Lily Costello will be hoping for a good result after her win in the Run-Swim-Run at round 1.

Open competition kicks off at 10am on Saturday 7th November. The annual Goldie Classic is scheduled for a 2pm gun, and it is certainly shaping up to be the best field in the history of the event.