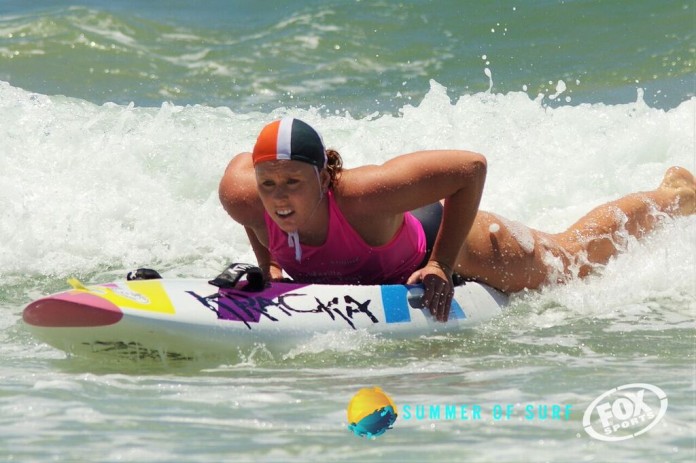 The half-way point of the Summer of Surf Series is fast approaching. For the fourth event of the season we will be moving south to visit Thirroul. As the last Summer of Surf event in 2015 we are coinciding with the grand final of the Sydney Water Surf Series, and there is no question that we will be seeing some close races across the weekend!

Woolongong is home to many of Surf Life Saving’s great athletes, who are all excited to be racing the best of the best in their own area. The local clubs are more determined than ever to race well on home turf! Warrilla-Barrack Point’s Maddison Prior will be one to watch in the women’s events. After some bad luck in round 3, the talented Ironwoman is focused on gaining some crucial points in the Surf Ironman Qualifying Series (SIQS). After missing out on the Nutri-Grain Ironwoman Series by a mere 4 points earlier this year, Prior will be hoping to prove herself in the SIQS, and secure herself a guaranteed spot in next seasons professional Ironwoman event.

In the Australian Beach Flags Series, Helensburg-Stanwell Park will be hoping to repeat the outstanding performance they had in last years Thirroul Summer of Surf event. The strong beach club took 7 out of the top 10 places in the women’s event with Laura Humphries, Siobhan Dibley, Bernadette Dibely, Yvetie Avery, Avalon Punch, Katie Mott and Ella Saberton. Their men were equally as impressive Tom Dewey, Jack Segan, Jack Williams and Tim Burgaman managed to take out 2nd, 3rd, 6th and 8th.

Many of Woolongong’s most successful Surf stars are looking forward to returning to race in the area. Ali Day, Hayden White, Ben Carberry, Beau Wheeler, Max Beattie, Alex Wright, Hannah Minogue, and Kirsty Higgison are all originally from the Wollongong area, and are proud to call it home! They will certainly be hoping that their bit of local knowledge will help them in a bid to take out a win on the weekend.

All of the action will be kicking of at 12:30pm on Saturday 5th December, followed by a full day of racing on Sunday 6th!