This year the Summer of Surf packed a whole season of racing into 3 weekends across NSW and Queensland. Forcing clubs to field their best possible teams every round, with one mistake being the difference between winning an overall title, or whinging about losing it on Instagram.

After we sat down and crunched the numbers, it became apparent that one club in particular, left nothing to chance. Alexandra Headland are without doubt the strongest club in this year’s edition of the Summer of Surf, boasting multiple teams in every final and now have a comfortable lead going into the final round.

Here are the scenarios for the overall teams titles next weekend.

With the “best 2 out of 3” results counting for the overall point-score, there are handful of teams that have wrapped up a Summer of Surf Series title with a round to spare. Meaning, these teams have already won both rounds in their respective events, and can put their feet up for round 3.

The teams that dominated are:

The Women’s Taplin looks to be all-but-over, with the Noosa A –team already posting a 1st and 2nd in the opening 2 rounds. The only team capable of spoiling the party is Alexandra Headland, who will need to finish inside the top 2 (and in front of Noosa A) to have a chance at taking the overall victory.

The Men’s board relay has been the talk-of-the-beach in the first 2 rounds, with egos from all over the country claiming to be the “best board relay in world”. So far, it’s the Vikings from Currumbin that are making the best case, with 2 teams sitting in 1stand 2nd wiht one round remaining. Only 2 teams outside of Currumbin have a chance of snatching the title, with Newport and Alex Headland both needing another top 3 finish, whilst ensuring that neither Currumbin team win the final round.

The Women’s ski relay is historically an event dominated by GON (Girls of Northcliffe). But it’s their little sister from down the road that is currently leading the way. Led by Veteran Bonnie Hancock, it’s the GOK (Girls of Kurrawa) that are leading the ski relay series. The only way they can be beaten, is a WIN from Alexandra Headlands. Anything less won’t be enough. No pressure Alex Girls.

Last, but most certainly not least, is the Mens Double Ski. Incredibly, there are still 6 teams that are a mathematical chance of winning the overall title. However, our analysts have declared that the glamour couple and defending champs Jamo Porter and Jett Kenny will be the favourites going into round 3.

PS: Some results may vary depending on count back scenarios.
PPS: Double Check the maths, we could be wrong. lol. 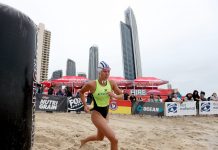