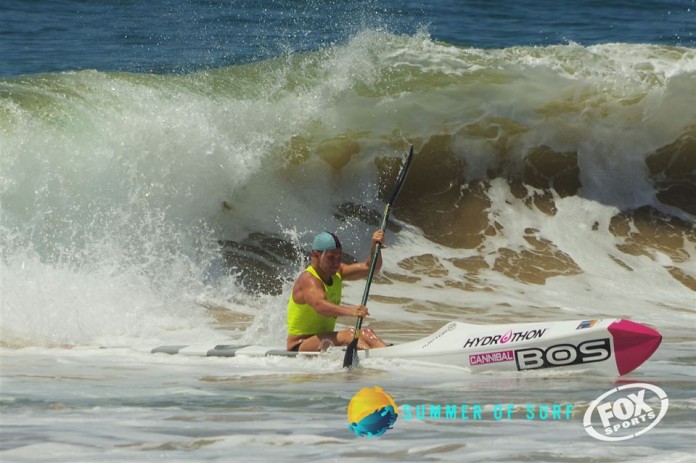 This weekend provided one of the most exciting Surf Sports events we have ever seen! As the fourth round of the Summer of Surf travelled to Thirroul, athletes faced some extremely tricky conditions and it was the smartest, most skilled and in some cases the luckiest competitors came out on top!

Marking the half-way point of this years season, competitors were determined to pick up as many points as possible in a bid to move up on the overall leaderboards. With extremely tight races there were battles for each and every place.

Jordan Mercer was a stand out in the women’s racing, after securing her first professional Ironwoman race win just a week earlier, she has a new found confidence in every discipline! In the Surf Ironman Qualifying Series, Mercer was able to use her strength on the ski and speed in a sprint up the beach to claim the win over Georgia Miller and Danielle McKenzie. After becoming the inaugural Summer of Surf Ironwoman Champion last year, Mercer has made her intentions to win back-to-back titles clear!

In the men’s SIQS local Beau Wheeler, who just recently left the area to join the Northcliffe club, looked to be in the best position going into the last leg. However much to the crowds upset the young Ironman was knocked off his ski and passed by the rest of the field. It was Hayden Allum that managed to work his way through the surf and paddle himself to the front. In an amazing display of skill Hayden pulled onto his own wave, and comfortable claimed the round 4 Ironman.

The Summer of Surf will be heading to the annual Jim Wall Ironman Challenge in Torquay for the first event of 2016. With only 4 rounds to go all of the athletes will be more focused than ever, and will do everything it takes to get a win!